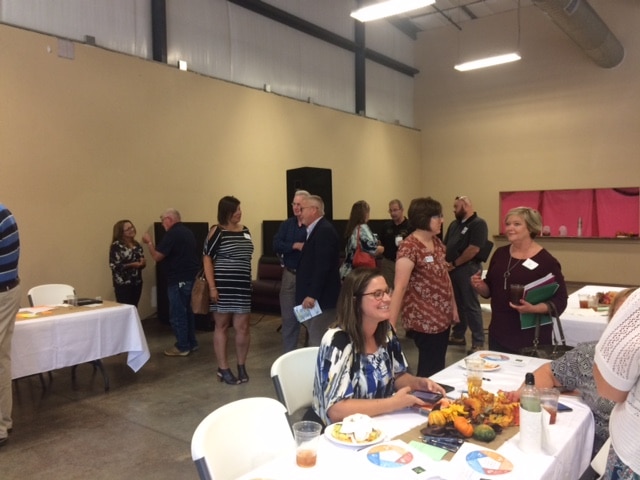 Discussion lasted long after the Fifth Monday luncheon ended 1 p.m., Monday September 30, at the Liston Center in El Dorado Springs. Ideas flowed and connections grew after the panel of workforce development program directors addressed the crowd of more than 60 community and economic development leaders. It was the fourth regional networking luncheon held on “fifth Mondays” through the year since the first one October 2018 in Appleton City.

Hidden Talent. El Dorado Springs Chamber of Commerce President Jackson Tough said he would be in touch with panelist Shellie Jacobs from the Missouri Department of Corrections’ re-entry program. She can help identify skilled people among some 17,000 ex-offenders that Missouri prisons release every year back into communities. It’s useful information for employers and communities trying to attract or support employers. Ms Jacobs cited one community that used her data to identify skilled workers in its region for a company seeking people with commercial sewing experience. 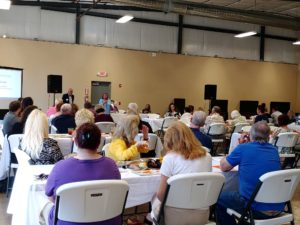 Apprenticeships. Panelist Suzanne Richards leads on-the-job apprenticeship programs at the Missouri Department of Labor. She explained how employers are using this opportunity to train workers they need, and keep them over the long haul, too, as those apprentices work their way up. Lea Ann Gatzemeyer, director of In-Home Health Services at West Central Missouri Community Action Agency reported that they just kicked off an in-home caregiver apprenticeship program with the Department of Labor. This step can help West Central secure workers and build the regional supply of skilled caregivers, too.

Ms. Gatzemeyer also spoke on the panel about the new ElDo Works! program based at the Liston Center, a renovated historic school building in an El Dorado Springs neighborhood, formerly known as the ElDo Youth Center. ElDo Works! pulls many different resources into one place for job seekers who encounter significant barriers to employment. ElDo Works! combines child care with pre-employment training (job searching, interpersonal skills etc.) because many job seekers cannot take next steps without covering that time away from their children.

Removing Barriers. ElDo Works! attracts and connects with many other resources, such as new offerings of HiSET classes (GED tutoring and testing) at the Liston Center. Kelly Ast, with community development corporation New Growth, leads development of the Liston Center. She said it is designed to be both a crossroads and a gathering place for people seeking resources and for service providers, such as the Parents as Teachers program, which also uses the Liston Center.

Panelist Linda Kirk, Executive Director of the Workforce Development Board of Western Missouri, welcomed the opportunity to bring Job Center services to the Liston Center on a regular basis. Regional Job Centers provide a broad range, from employment counseling to helping employers cover wages for new hires. Representatives from the Nevada-based regional Job Center made plans with Liston Center organizers to move forward with scheduling.

Ms. Ast invited luncheon participants to join in future “Liston Listening” sessions to help build the Liston Center as a supportive and creative resource for the surrounding neighborhood and larger Cedar County community.

5th Monday Partners. These are just some of the conversations and connections that took place at the September 30 Fifth Monday. Luncheon organizers are a team of regional groups that have been meeting at least monthly since 2017 to share notes and collaborate on community economic development projects.

Register for an Event!